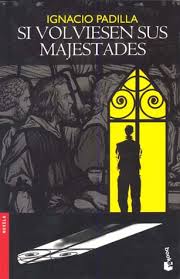 The latest addition to my website is Ignacio Padilla‘s Si volviesen sus majestades [If Their Majesties Were to Return]. This is a wonderfully chaotic novel, nominally set in the 16th-17th century (and written in a variation of the language of that time) but a 16th-17th century that has cinema, computers and inflatable sex dolls. The fictitious country was a monarchy but the King and Queen have left in a balloon (it is not clear why) and only a seneschal and jester are left. The novel explains the colourful history of the seneschal (descended from a man who lost a grail-like object and whose descendants have to search for it as well as being descended from a man created, Frankenstein-like, by his father), how he came to be seneschal, why the people all left and how an ancient computer almost plunged the country into chaos. It is superbly inventive, very funny and completely insane, a thoroughly enjoyable novel which sadly has not made it into English and probably never will.

2 Replies to “Ignacio Padilla: Si volviesen sus majestades [If Their Majesties Were to Return]”