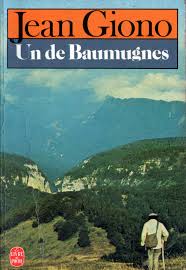 The latest addition to my website is Jean Giono:‘s Un de Baumugnes (Lovers are Never Losers). This is the second in Giono’s Pan trilogy of novels. This one is a love story. Amédeé, an older itinerant farm worker meets Albin, a young man from the eponymous Baumugnes, a strange (and fictitious) community of non-Catholics driven away during the French religious wars, whose ancestors had their tongues cut out. Albin had seen an attractive young woman, daughter of a farmer, three years ago but had been too shy to approach her and his brash friend, Louis, had seduced her. Eventually, Louis took her back to Marseilles and forced her into prostitution. She had a baby but did not know who the father was. Amédée is determined to find her and goes to work at the farm where her parents live. Initially, there seems to be only the husband and wife and Saturnin, their long-time permanent hand, but he soon suspects there is someone else there. Could it be Angèle? He hurries off to tell Albin. Giono tells a first-class story, full of local colour, both in terms of the wonderful descriptions but also the use of language, at least in the French.