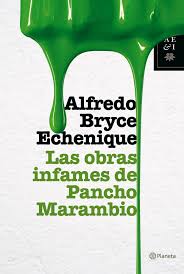 The latest addition to my website is Alfredo Bryce Echenique‘s Las obras infames de Pancho Marambio [The Infamous Works of Pancho Marambio]. Bienvenido Salvador Buenaventura is a fifty-four year old successful lawyer in Lima. He has never been married. His parents and two brother are both dead, the men from alcoholism. The two others were never married either. He has decided to retire, leave Lima and go and live in Barcelona. He stays with an old friend and when he finds a suitable flat, at the recommendation of the friend, he takes along Pancho Marambio. Pancho offers to do the necessary work on the flat, while Bienvenido goes off travelling around Europe. He pays Pancho in advance. Pancho, however, has something of a reputation as a cowboy and, when Bienvenido returns, disaster awaits. He castigates Pancho and sets off again but, this time, the family curse appears and he spends much of his time in bars. When he again returns, things are somewhat better but the colour scheme is diabolical, things do not work and the design is poor. Bienvenido quickly slips into alcoholism and, despite the efforts of friends, gets worse and worse, as we follow his downfall. This is a not a bad book but not of the calibre of his earlier work.