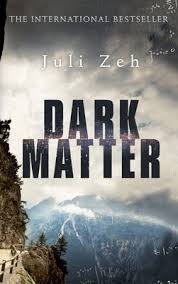 The latest addition to my website is Juli Zeh‘s Schilf (UK: Dark Matter; US: In Free Fall). This is a novel where theoretical physics meets the detective story. Two theoretical physicists – Oskar and Sebastian – have been firm friends since meeting physics class at university, though the friendship is no longer as strong as it was. Oskar, still single, lives in Geneva, working on the particle accelerator, while Sebastian, who is married to Maike, with a son, Liam, teaches physics at the University of Freiburg. Maike, a keen cyclist, is going away on a cycling holiday and Sebastian is to take Liam to scout camp, giving him a joyful couple of weeks on his own to work on a physics problem. On the way to the scout camp, Sebastian stops to go to the toilet, leaving the sleeping Liam in the car. As he leaves the toilet, his phone rings. The car and Liam have gone and the apparent kidnapper tells him that Dabbelink must go. Dabbaelink is an anaesthetist, who cycles with Maike but whose boss is involved in a medical scandal. Sebastian eventually does kill Dabbelink, only to find, a few days later, that Liam is alive and well and at the scout camp. Schilf is sent from Stuttgart to solve the problem. Schilf is dying (he has a brain tumour) but is a very successful though unconventional detective. The second part shows how Schilf, using, to a certain degree, theoretical physics, solves the problem leading to what can only be called an unexpected and unusual conclusion. It is very cleverly done, as Zeh mixes in police work and theoretical physics, particularly the many-worlds interpretation, one of whose main exponents is Dieter Zeh (no relation).