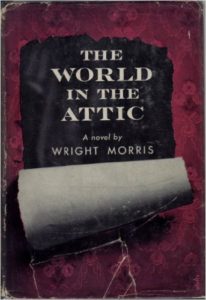 The latest addition to my website is Wright Morris‘ The World in the Attic. This book follows on from The Home Place. The two books are very similar, except that The Home Place contained photos. The book is about a visit of just under two days by Clyde Muncy (based on Morris), his wife, Peg, and his two young children to Junction, Nebraska, where he grew up. Clyde essentially abandons his family and visits old friends and old haunts, though he finds, in some respects that the town has changed, though in others it has not changed much. The Muncys spend the night with his old friend Bud. However, early the following morning, Bud’s aunt, from whom he is estranged, dies and Clyde again abandons his family and becomes very much involved in the funeral arrangements. This is an exercise in nostalgia, about the charms of rural Nebraska and how different it is from New York where they now live and, as such, is very well written by Morris.