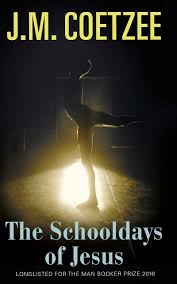 The latest addition to my website is J M Coetzee‘s The Schooldays of Jesus, a follow on from his previous novel The Childhood of Jesus. As with this previous novel, the link with the biblical Jesus is not always apparent. Davíd, the presumably Jesus character, has been taken by his guardians, Inés and Simón, from Novilla to Estrella, in an escape reminiscent of the biblical Flight into Egypt, not least because they are escaping both the authorities and a future census. They initially work on a fruit farm, to keep a low profile, but then Davíd is admitted to a dance academy run by a couple, who share names (albeit hispanicised) with the composer Bach and his wife. He already seem to be drifting apart from Inés and Simón and the academy accentuates the drift, as he maintains that Inés and Simón do not understand the role of numbers in dancing. Indeed, one of the key themes of this book that he is clearly becoming more independent from the two of them, despite the fact that he only reaches his seventh birthday at the end of the book. It is a strange book, not least because it is not clear where Coetzee is going with the Jesus comparison, though no doubt future books will make things clearer.