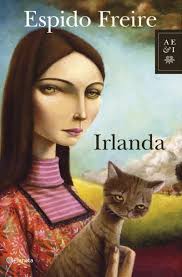 The latest addition to my website is Espido Freire‘s Irlanda (Irlanda). Freire’s first novel is the only one of her novels to be translated into English. It tells the story of Natalia, a teenage girl whose sister, Sagrario, dies at the the beginning of the novel, after a long illness. She is invited to spend the summer with her cousins, Irlanda, three months older than her, and Roberto, quite a bit older. They live in a separate house on the parents’ property. This property used to belong to her grandparents but her mother sold her share to her sister and her sister’s husband, as they needed the money, so there is very much the sense of being the poor relations. Natalia does not fit very well with her cousin and their friends. Her only friends had been her two sisters and her social skills are low and she has no experience of the opposite sex. She spends much of the time on her own, in a dream world. More particularly, she talks regularly to her dead sister, whom she considers as very much alive and she sees everything as though the world is a fairy tale, from mysterious forests to strange creatures and knights in shining armour. When Gabriel, Roberto’s friend, shows an interest in her, she does not how to react but she does know how to react when he spurns her for the more attractive and lively Irlanda. This is an excellent novel about dealing with growing up and dealing with the death of a loved one, with a sharp edge to it. Interestingly enough, it has been published in English by a publisher I had not heard of before: Fairy Tale Review Press, but do not let that put you off. 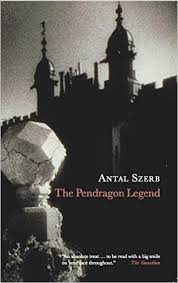 The latest addition to my website is Antal Szerb‘s A Pendragon-legenda (The Pendragon Legend). Szerb’s first novel is a wonderful romp, with a complicated plot involving a thirty-two year old Hungarian intellectual, living in England and getting caught up in a plot involving eccentric (if not mad) English, Welsh, Irish and German characters, with ghosts, ancient castles with secret trapdoors, the Rosicrucians, a Welsh earl who experiments on animals, not to mention the whole paraphernalia of the Gothic/ghost novel. Our Hungarian hero, János Bátky, is somewhat out of his depth but does not really mind, as long as there is a nice young woman to jump in into bed with and there are ancient manuscripts for him to peruse. He gets caught up in plots and counter-plots, always one step behind the villains but somehow manages to come out more or less unscathed. It is a great fun and fast-paced and certainly not a novel to leave you bored, with its complicated plot. 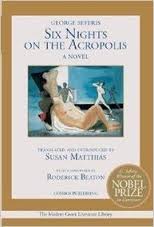 The latest addition to my website is George Seferis‘ Έξι νύχτες στην Ακρόπολη (Six Nights on the Acropolis). Seferis won the Nobel Prize for his poetry. This was his only completed novel and it is easy to see why he owed his success to his poetry rather than to his novel-writing. It imitates the French novel of the 1920s – Gide and Valéry are big influences. It is about Stratis (clearly based on Seferis himself) a poet, whose family was driven from Asia Minor in the Greo-Turkish War, who has spent some time in France and now is back in Greece, struggling to become a poet and to get on with his life. He gets involved in a love triangle with a woman known as Salome (real name Billio) and her young protégée and would-be lover, Lala. He has met them through a group of intellectuals, who decide to meet for six months on the Acropolis whenever there is a full month, i.e. once a lunar month. These meetings seem casual and desultory with a certain amount of discussion about art but not much else. Stratis sort of finds himself, at least to a certain degree, but the whole thing does not really work unless you enjoy a somewhat watered-down version of a 1920s French novel. 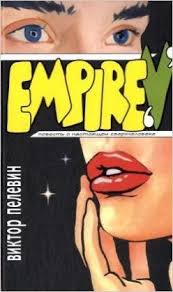 The latest addition to my website is Victor Pelevin‘s Ампир В (Empire V). This is the usual Pelevin post-modern satire on Russia and its ruling class but takes as its basis the idea of vampires. That the Russian ruling class (and, indeed, other ruling classes) are vampires is not, perhaps, a terribly original idea but Pelevin, as always, takes it and runs with it much further than we might expect. Indeed, some might say he goes perhaps too far as he gets quite involved in the intricacies of vampire life, behaviour, customs, history and philosophy. The basic plot is of a young man, Roman, who lives with his mother is turned into a vampire. Vampires essentially rule the world (and Russia, in particular). Through him we learn what vampires do, what they think and how they run things (through a group called the Chaldeans, their intermediaries with the human world). Roman, now called Rama, learns all about vampires and learns their ways and how to behave as a vampire, which mainly involves not sucking blood from humans but sucking their money from them. He learns to fly as a vampire bat, when it is appropriate to suck blood, not to allow his sexual partners to have fake orgasms and even how to fight a duel, vampire-style. It is often funny, with the usual language games, satire and jokes but I felt that Pelevin got carried away too much with the minutiae of vampiredom.