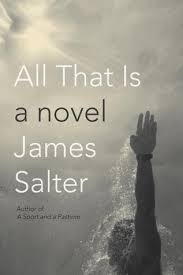 The latest addition to my website is James Salter‘s All That Is. This novel was published shortly before his death but thirty-four years after his last novel. The main character is Philip Bowman, born, like Salter, in 1925. Like virtually all the characters in the book – and there are a lot – he is not very successful at relationships and does not tend to stay very long in the same residence. His only marriage, to a posh girl from the Virginia horsey set, soon ends when she realises what we and her parents (divorced, of course) have long realised, namely that they are very different and incompatible. His subsequent relationships are no more successful but then nor are those of anyone else in this novel. He goes into the publishing business, starting as a publisher’s reader and then becoming an editor in a small but prestigious house, after having served in the navy during the war. Most of the novel is about the transience of his life, even though he essentially stays in the same job for most of his career, leaving us with a novel, while certainly not a bad one, seems itself to be a bit transient.