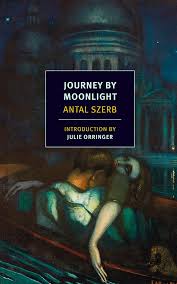 The latest addition to my website is Antal Szerb‘s Utas és holdvilág (Journey by Moonlight). This is a wonderfully written book about a man, Mihály, who struggles to cope with life and is obsessed with death. As a child, he had been part of a small group – a brother and sister, Éva and Tamás, who played strange, often sexual games, were generally unconventional, though they went through a religious phase and were obsessed with the idea of suicide, as well as two other boys, Ervin, a Jew who later became a Catholic priest, and Janós. All four boys and, later, young men, were in love with Éva, including her brother, who later committed suicide. Mihály goes to work in his father’s firm, which he does not enjoy, and marries Erzsi, whom he has lured away from her husband, the philanderer, Zoltán. The book opens while they are on their honeymoon in Venice. There he encounters Janós which brings back his past and he – possibly accidentally, but probably not – abandons Erzsi and drifts around Italy, struggling to find both Éva and himself, while becoming obsessed with death and quite unsure of who he is and what he wants to be. He meets a series of strange people, including Ervin, now a very holy priest. He even meets Éva a couple of times but that relationship is never going to work. It is a first-class book about a man struggling with his life and essentially failing to come to grips with it.