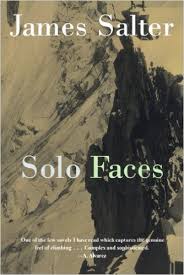 The latest addition to my website is James Salter‘s Solo Faces, a novel about mountain-climbing. We first meet Vernon Rand as a roofer in California but we soon learn that his passion is mountain-climbing. Much of the novel is set in the French Alps where Rand will go mountain climbing, initially with others and then, as the title tells us, on his own. He is loner, fiercely independent. He gets trapped by bad weather, has to help a companion who is badly hurt and even leads a small team to rescue a couple of Italians, one of whom is hurt, trapped in bad weather, which makes him briefly famous. He has a series of relationship with women, always abandoning them and moving on, as he does with the mountains. Rand is actually based on Gary Hemming though Salter certainly did a fair amount of climbing himself, mentioned in this interview.