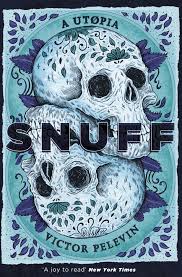 The latest addition to my website is Victor Pelevin‘s S.N.U.F.F. (S.N.U.F.F.). This is another glorious post-modern romp through Russia and its foibles and, indeed, lots of other places and things and their foibles, which Pelevin inevitably mercilessly mocks. It is set in the future where the two main countries are Big Byz(antion), clearly based on the USA and Western Europe, with advanced technology and more sophistication, and Urkaine (sic) whose inhabitants are called Orks and who are unsophisticated and technologically backward, clearly based on Russia and non-EU Eastern Europe. To keep the people of Big Byz entertained, the news companies periodically start wars, which are filmed by CINEWS (pronounced sinews). The narrator of this story, Damilola, is a camera operator-cum-rocket-operator for CINEWS and he is called on, at the beginning of the book, to start yet another war for the SNUFFs (which stands for Special Newsreel Universal/Feature Film) but which are, of course, snuff films, in the sense that many of the participants are killed. To help, he needs two Orks and finds Grim and Chloe and helps them become TV reality stars. Meanwhile, he cavorts with Kaya, a sura or surrogate wife, i.e. a robot sex doll, whose moods and behaviour can be adjusted but who seems to have a mind of her own. The war takes place. People die but life goes on and Pelevin mocks all of them.