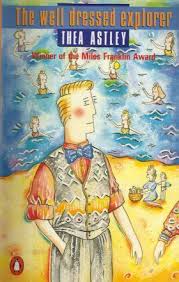 The latest addition to my website is Thea Astley‘s The Well Dressed Explorer. The eponymous well-dressed explorer is George Brewster who, when a young teenager falls in love with Nita. Nita is happy to play along but also wants to enjoy herself and not just with George. He hovers around her, returning even when his family move, but she will not be tied down. He gradually makes his name in the newspaper business, ending up in Sydney. Nita actually suggests marriage but he has no money so she goes off and marries someone else. It is no consolation to George that she is not faithful to her husband. In a fit of pique, he contacts one of the bridesmaids and, in no time at all, has married her. However, George is a thoroughly self-centred man and is continually unfaithful to Alice, his wife, as well as being unfaithful to his various mistresses. He drifts through life, drinking and chasing women or, rather, loving being adored by women, and not really achieving much in his career, where he seems to be rather mediocre. Even his daughter eventually comes to despise him. Though this book won won the Miles Franklin Award in 1962, it did not really work for me, as George Brewster was actually rather a dull character while, at the same time, being too much like too many people both in fiction and real life.