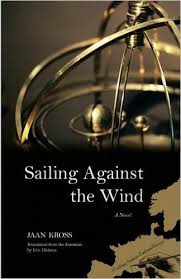 The latest addition to my website is Jaan Kross‘s Vastutuulelaev: Bernhard Schmidti roman (Sailing Against the Wind). This is a superb novelised biography of Bernhard Schmidt – despite his name and the Wikipedia article, an Estonian – who invented various things, including, in particular, sophisticated astronomical telescopes and the boat that sailed against the wind of the title. As a boy, experimenting with a rocket, he lost a hand but, nevertheless, managed to become a first-class craftsman, producing lens of the highest quality, superior to machine-made ones. Being Estonian, he was subject to the vicissitudes of late nineteenth/early twentieth century, particularly at the hands of the Germans and the Russians. He spent a long time in Germany but remained resolutely Estonian. Kross tells us about his inventions and what led him to them but he also tells us about his life, about the inner man, about his dealings with the political situation (not always diplomatically) and about his sex life. It is a first-class story and a first-class biography about a man most of us will never have heard of.