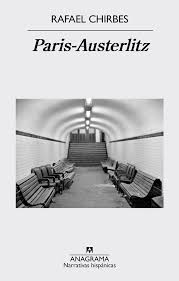 The latest addition to my website is Rafael Chirbes‘ Paris-Austerlitz. Chirbes had started this book in 1996, put it aside and then returned to it later, only finishing it last year, shortly before he died. It is a semi-autobiographical account of a homosexual relationship between a young bourgeois Spanish painter and a much older working-class French man. The unnamed narrator, the Spanish painter, has been thrown out his flat for not paying his rent and is taken in by Michel, who not only puts him up but looks after him and gives him money. Initially the relationship works well and the two are happy together. However, the narrator cannot really paint, as Michel’s flat is too small and too dark, so when he inherits some money he rents an adjacent flat with more space and light. This is the beginning of the end of the relationship. Gradually the relationship falls apart. Already at the beginning of the book, we know what has happened, as Michel is in hospital with AIDS, from a relationship after he broke up with the narrator. What makes this book more interesting than other similar works is the narrator’s detailed analysis of the relationship and of his and Michel’s motivation and feelings. This is certainly not his best book but nevertheless an interesting swan song.