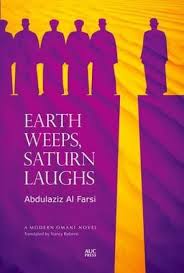 The latest addition to my website is Abdulaziz Al-Farsi‘s تبكي الأرض– يضحك زحل (Earth Weeps, Saturn Laughs), the first Omani novel on my website. It is a gently mocking satire of a village in Oman where the majority of people seem to be conspiring against others, have guilty secrets which are only gradually revealed (to us, at least) and where few are happy with their lot. The main character is Khalid who had escaped for the village to city but returns after an unhappy love affair. His only friend is the imaginary poet from Saturn, though he has the protection of his influential grandfather. He is only peripherally involved in the various conspiracies and plots in the village, including who should be the muezzin, who the imam, who the leader and where the meeting house should be, all of which result in plots and counter-plots, with the village split on all of the issue and resulting in mayhem and murder, perhaps as the result of a curse on the village. He mocks their hypocrisy, their religious quibbling and their petty-mindedness. It is all great fun and Al-Farsi tells his tale very well.