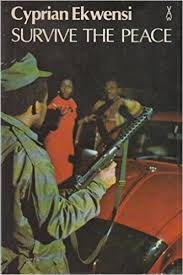 The latest addition to my website is Cyprian Ekwensi‘s Survive the Peace. This novel is set at the end of the Biafran War. James Odugo is a radio journalist who has been travelling around Biafra, broadcasting news of the war, with the radio station continually having to move as the Federals get closer. James’ wife and children are in a village well removed from the war. He is having an affair with Vic, a woman who also broadcasts for the radio station. At the start of the novel, the war seems to be ending. The town where James and Vic is bombed but Biafran soldiers rush into the town and discard their uniforms and weapons and flee. James and Vic manage to escape in his car and stay with a friend of James in another town. Vic wants to find her mother, James to find his family and Gladys Nwibe, with whom James had a brief fling earlier in the war, wants to find him. As the title tells us, surviving the peace is often more difficult than surviving the war, as chaos ensues, with armed robbers, the Nigerian soldiers raping the women, a shortage of food and other supplies, refugees fleeing and disease, when all most people want to do, James and Vic included, is to put their lives back together and start living a normal life. Ekwensi tells a good story of the hazards of a life after a war, where most people find their lives thrown upside down and most people have lost a friend or relative.