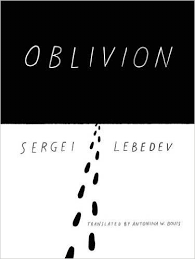 The latest addition to my website is Sergei Lebedev‘s Предела забвения (Oblivion). The Russian title means something like The Limits of Oblivion, though much of the novel is about recovering lost memories, specifically lost memories of the Soviet era of prison camps. The unnamed narrator is rescued twice by a man he calls Grandfather II. It is Grandfather II who persuades his mother and her family to have a child, when doctors had suggested an abortion, for her delicate health and it is Grandfather II who gives his blood (at the expense of his own life) when the narrator is badly bitten by a dog and there is no suitable blood for him. In between these two events, Grandfather II, who is blind, has helped the narrator grow up and taught him much. Grandfather II has always kept his past secret and, eventually, after Grandfather II’s death, the narrator investigates, on the basis of some letters he finds in Grandfather II’s dacha. The trail leads him to a town which had been a prison camp (and still looks somewhat like one) where minerals were mined from a huge quarry. There he makes a surprising find about Grandfather II’s past and then heads out to the tundra, where there are a few former prisoners and an inhospitable climate. Above all, Lebedev gives us a first-class though very grim picture of life in the Russia of prison camps and an only marginally better portrait of life there in the post-Soviet era, with stories, psychological insights (not least about the narrator) and descriptions of landscapes, which show Lebedev to be a writer to watch.