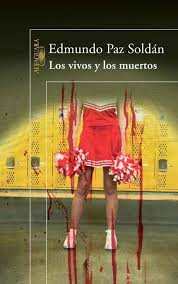 The latest addition to my website is Edmundo Paz Soldán‘s Los vivos y los muertos [The Living and the Dead]. It is based on events in the 1990s in the town of Dryden, New York, when nine people died in the space of three months, seven of whom were murdered. Paz Soldán lived in nearby Ithaca and followed the events, particularly as seven of the victims were adolescents. His novel tells a story of similar but different events in the fictitious town of Madison, with two twin brothers killed (in separate incidents) in car crashes, four people murdered by two sexually obsessed men, the two murderers committing suicide and one other car crash death, the result of drunk driving. Paz Soldán states in the afterword that he wanted to write a meditation on loss but it is also about a community that seems fairly normal at first sight but has its problems underneath. Before the deaths, we see a man dishonourably discharged from the US Air Force for sexual assault, who brutalises his wife and sons and lusts after his fifteen-year old neighbour, unhappy marriages and adolescents struggling to cope, with sexual and drug problems not uncommon. The sense of loss is not surprising but it tends to exacerbate the already fragile community spirit. It is a grim novel but an interesting novel about a community which, as they say, seems to be living in a Stephen King novel.