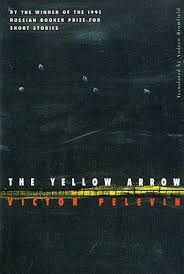 The latest addition to my website is Victor Pelevin‘s Жёлтая стрела (The Yellow Arrow). This short novel is a train-as-a-metaphor-for-life novel, by no means the first in Russian literature. This train, called The Yellow Arrow, is a huge train. No-one knows where it comes from and only a few people seem to know that it is heading for a ruined bridge – possibly. No-one gets on and no-one gets off, not least because the train never stops. The main character, Andrei, has more or less accepted this and carries on his life. And life does go on. Sex, drink, food, tobacco, a theatre, religion, all are to be found on the train, though Andrei, when he is not reading the train magazine or a book about Indian railways (which seem remarkably similar to this railway) spends his time chatting with various friends. It is Khan who awakens in him the possibility that there may be life off the train and it may be possible to get off, though Andrei, at least initially, does not accept this. He gets onto the roof, where he sees people just sitting and chatting and accepting things, though one man does successfully dive into a river they cross. But will the train ever stop and can Andrei get off, if it does? It is an enjoyable metaphor/allegory about life in Russia and, possibly, about life elsewhere.