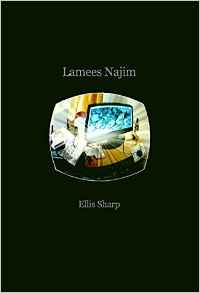 The latest addition to my website is Ellis Sharp‘s Lamees Naji,
the third Sharp novel published this year and the third I have reviewed in the past couple of weeks. This one is different from the other two. While it is certainly experimental, on the surface it seems quite mundane. We follow the life of a writer called Ellis (the story is in the third person) as he recounts his daily life – his breakfast, his musical tastes, his reading, the films he watches (not very good ones), his sleeping habits.) In particular, we follow his reading, both of books and newspapers but, more particularly, on the Internet. At first glance these also seem mundane. He reads the news. He reads book reviews. He reads about music and musicians. But, gradually, we see that there is a political angle to his reading. He reads about the unfair treatment of Greece by the EU over its debt crisis. He reads about drones and executions and Nazis and anti-Arab discrimination. Most of all, he reads about Palestine and, in particular, the Israeli invasion and destruction of Gaza in 2014 and the aftermath of those events. This gradually builds up to a crescendo, where it is virtually all about Palestine, before gradually coming back to the daily life of Ellis. He also quotes from a few books, about experimental literature and the decline of British fiction, with the quotes clearly relevant to what he is writing. It is not for everybody but, using a fairly mundane style, he manages to say more in this relatively short book than many British fiction writers do in their more grandiose books. And the last two words in the book are Lamees Najim, the first mention of this woman, a victim of Israeli terrorism.