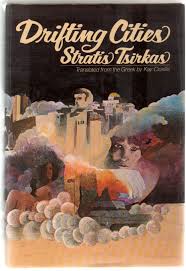 The latest addition to my website is Stratis Tsirkas‘ Ακυβέρνητες Πολιτείες (Drifting Cities. This is a trilogy of novels, often compared to The Alexandria Quartet. Like that book, it takes place during World War II, though each book is set in a different city – Jerusalem, Cairo and Alexandria, respectively. The story is centred around the struggle of the expatriate Greeks to set up a new government, with a view to forming a government after the Germans are driven out of Greece. Unfortunately, there are numerous factions, from the Communists to the Fascists/Monarchist, and everything in-between, all vying for support and power. Our hero is Manos, a left-wing humanist (but not Communist), who works with his group who often feels that the British are as much as the enemy as the Germans, as Churchill definitely wants the right-wingers in power. The first book, set in Jerusalem, revolves around the boarding house of Anna Feldman, a Cologne Jew who is one of the many exiles, who have left their country because of the political situation. Manos is one of the many residents in the boarding house and we follow their often complex political and complex love life. The second book has Manos injured in the desert soon after the Battle of El Alamein and (falsely) accused of murder as the British try to track him down. In the third book, we meet his extended family, as his mother originated from Alexandria, and British treachery gets worse and the situation comes to something of a climax with the Greeks. If you can work your way around the complex Greek politics, it is a fine book, perhaps not as fine as The Alexandria Quartet but still well worth reading.