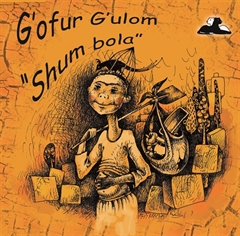 The latest addition to my website is Gafur Gulom‘s Shum bola [The Rascal, a light-hearted Uzbek novel which has been translated into German but not into English. This tells the tale of a fourteen-year old Uzbek boy from Tashkent, who because of his lies and mischievousness, gets himself into a series of amusing scrapes. He has to run away from home when he is caught by his mother stealing butter and an egg and, from then on, he gets into all sorts of trouble, including misfeeding his uncle’s favourite birds, mistakenly slaughtering a donkey instead of a cow, stealing a cow, twice being wrongly accused of stealing at a bazaar, being involved in a prayer-selling scam, spying on a harem, lying to his friend, losing sheep he was meant to be guarding and even working in an opium den. He and we get a picture of Uzbekistan, as he travels around the country, frequently visiting bazaars. We know when it is, as World War I is going on but, apart from some prices rise, it seems very remote and virtually irrelevant to the Uzbekis. It is, however, all good fun. Sadly, the book seems to be only available in Uzbekistan (I got my copy in Khiva, if that helps) and not available, at least as yet, in Western Europe or North America.

At one point, the questionable morality of our hero and his fellow Uzbeks is referred to with the phrase Everything that has no owner belongs to Hoja Nasreddin. This is a reference to an Uzbek folk hero, subject of many Uzbek stories. Nasreddin is generally believed to be of Turkish origin but the Uzbeks are determined that he was Uzbek. As you can see to the right, there is even a statue of him in Bukhara. Many of his stories have been translated into English. You can read a few here. As with the hero of Shum bola, he is a loveable rogue. Here is one which was told to us while we were looking at the statue on Bukhara.

Nasreddin was boasting to people that he could teach a donkey to speak. The people were used to his ways, so ignored him but word got to the Emir. The Emir summoned him and asked if it was true that he could teach a donkey to speak. He confirmed that this was the case. The Emir then produced a donkey and ordered Nasreddin to teach him to speak.
I am afraid that it will take a very long time, Nasreddin said.
I will give you one year, the Emir responded.
Oh no, it will take me ten years, was Nasreddin’s response.
Ten years? Are you mad? screamed the Emir.
It is very complicated teaching a donkey to speak, Nasreddin retorted. I will need ten years to do so.
The Emir reluctantly agreed to the ten years.
And it will be very expensive, Nasreddin added.
Very well. I will give you one hundred gold coins, said the Emir.
Oh no, that is not nearly enough, Nasreddin replied. I will need one hundred thousand gold coins.
One hundred thousand gold coins? Out of the question!
Then I am afraid that I cannot teach a donkey to speak, Nasreddin responded.
The Emir reluctantly summoned his vizier and ordered him to give Nasreddin the hundred thousand gold coins.
However, he concluded, if you do not teach the donkey to speak within the ten years, I will have you beheaded.
Nasreddin joyfully went home and threw the coins onto the kitchen table in front of his wife. She was impressed but asked him where he got them from. He explained the story of the donkey and the Emir.
Nasreddin, she said, others may be taken in by you but I know you well. You cannot teach a donkey to speak. In ten years, the Emir will have you beheaded.
Oh don’t worry, my love, Nasreddin replied, In ten years either the Emir or the donkey will be dead.