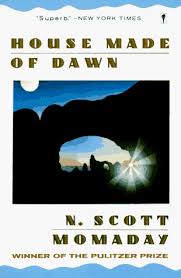 The latest addition to my website is N. Scott Momaday‘s House Made of Dawn. This was the first Native American novel to win a Pulitzer Prize. It tells a familiar tale, that of a Native American man who cannot find his way in white society and turns to drink for solace. Abel had been a fine runner as a young man and had been brought up by his grandfather in the traditions of his people, hardworking and responsible. His mother and older brother had died when he was still young and he never knew his father. However, he had had to go off and fight in the war, where he did not fit in and the memory one of his white comrades has of him is doing a crazy war dance in front of attacking German tanks. When his grandfather collects him from the bus stop when he returns from the war, he is drunk. A defeat by an albino in a horsemanship contest at a local celebration leads him to murder the man, as he is clearly, in Abel’s eyes, a witch. After six years in prison, he is in Los Angeles but things do not go well there and he turns to drink. Only after being badly beaten up by a rogue cop and sent to hospital does he return home, to look after his dying grandfather. Momaday not only tells his story very well, showing in a fairly dispassionate way the plight of the Native American in a white society, his painterly description of the land and the people on it are masterful. It is still as worth reading now as it was forty-seven years ago.