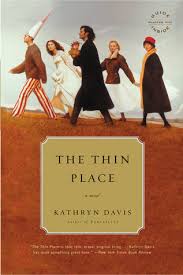 The latest addition to my website is Kathryn Davis‘ The Thin Place, a brilliant but understated novel about spirituality, the forces of nature and the role they play in our lives and the often arbitrariness of life, but all firmly rooted in the real world. The real world, in this case, is a small New England town called Varennes, not far from the Canadian border. The people of the town get on with their lives but Davis also shows us that nature also does, in its way. This can take the form of animals doing what animals do, plants growing, and meteorological and geological forces affecting the lives of the people, either brutally, as in the case of a storm, or more subtly, as Davis shows us the geological forces that shaped the town and surrounding area. In the hands of a lesser writer, this could have varied from the sentimental to the silly but Davis cleverly integrates it into the different stories of the people of Varennes. Much of what the people do is what people do elsewhere. They marry, separate, grow old, go to school, have affairs, go to church and so on. But other things happen. A man seemingly dies but is revived by a young girl. Was he dead or just unconscious? One of her friends does the same to a dog, that had been shot and apparently killed. Accidents happen and people are injured and die. But meanwhile, people worry about the homeless using the church, about their relationships, about the Gilbert and Sullivan performance the children are putting on at school. Davis is clearly telling us to be responsible towards nature in its broadest sense but also warning us that sudden forces, whether from outside or within, can suddenly send us veering off course and, of course, can bring death. This a wonderful novel about some of the bigger things in life and how they affect our everyday life and deserves to better known.