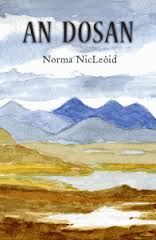 The Saltire Society has announced its shortlist for its 2015 literary awards. While the fiction list has several of the usual suspects – Irvine Welsh, Kate Atkinson, the underrated Janice Galloway, whose novel The Trick is to Keep Breathing I read many years ago and plan to reread and review some day, Andrew O’Hagan amd Michael Faber, what is most interesting to me is the incluson of a novel in Scottish Gaelic: Norma NicLeòid/Norma Macleod’s An Dosan (Dosan is a shortened form of the title character’s full name, Domnhall Seumas Iain). Macleod, who lives on the Isle of Skye, has written all her novels in Gaelic. I have just read Moray Watson’s An Introduction to Gaelic Fiction and he speaks highly of her, not least because she is the first author to write a sequel novel in Gaelic! Her husband Fionnlagh and her nephew, Iain, have also written novels in Gaelic. Anyone who has browsed my site, will know that I very much welcome novels written in minority languages, particularly those in the middle of the culture where there is a dominant world language, so long may the NicLeóids/MacLeods continue to write novels in Gaelic. It would be nice if one or two were translated into English but it is a good thing that these small cultures can keep the tradition alive in their own language. It is also good that the Saltire Society recognises the importance of the Gaelic tradition.