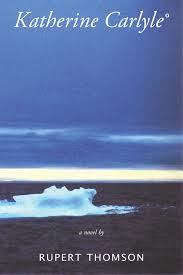 The latest addition to my website is Rupert Thomson‘s Katherine Carlyle. Thomson’s novels tend to be dark and are often concerned with people trying to escape. This one is no exception. The eponymous heroine is nineteen years old. She lives with her father in Rome though he is usually absent, as he is a war reporter for television. Her mother had died of ovarian cancer. Kit, as she is known, is to go up to Oxford shortly. However, she is now seeing various signs. These are various found objects such as keys, coins, and playing-cards, which she thinks have a meaning just for her, though what that meaning is does not seem to be clear. Eventually, the one sign that she thinks is significant is when she hears an English couple talking about a man who lives in Berlin and whose girlfriend has just dropped him. They even mention the square where he lives, so Kit sets off to track him down. Track him down she does but he is merely the beginning of her quest, which will eventually lead her to Ugolgrad, a fictitious Russian settlement on the Norwegian archipelago of Svalbard. It remains unclear what her motives are for the quest and for leaving her father, without telling him and what she hopes to find in Ugolgrad but then maybe that is the point – we do things or, as we think, other people do things whose motivation is unclear. This is not Thomson’s best book but it does make for an interesting read.