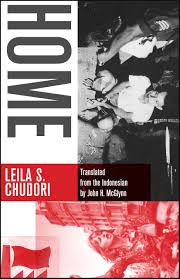 The latest addition to my website is Leila S Chudori‘s Pulang (Home). The novel tells the story of a group of Indonesians who are abroad in 1965, during the 1965 anti-communist coup and are unable to return and have to spend the rest of their lives abroad. The main character is Dimas Suryo, who is left-wing but definitely not communist. He was fortunately abroad at the time of the coup and he and his colleagues are able to go first to China and then to Paris, where they eventually open an Indonesian restaurant, which becomes successful. Dimas meets and marries (and later divorces) a French woman, he meets during the 1968 May uprising. They have a daughter, Lintang, who feels herself mainly French but is well aware of her Indonesian blood and heritage and will, in much of the second part of the book, go to Indonesia to make a documentary as part of her film studies course. While there, she is caught up in the upheavals in Indonesia in 1998, which led to the downfall of Suharto. Chudori tells a first-class story about political exile, struggling with identity in an alien even if friendly land and a longing for a home that will remain permanently closed.