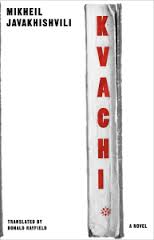 The latest addition to my website is Mikheil Javakhishvili‘s კვაჭი კვაჭანტირაძე (Kvachi). This is a book I have long been wanting to read, even since I read about it in Donald Rayfield’s essential The Literature of Georgia. We must be grateful to Dalkey Archive Press for publishing it (in a translation by Rayfield) in English, in their excellent Georgian literature series, which has revealed already several first class novels. This one tells the story of a loveable but thoroughly scurrilous rogue. His birth is auspicious – the obligatory thunderstorm – and he is precocious. His first activities consist of sleeping with women and charging them, starting with his (married) landlady but he soon gravitates to more sophisticated scams. He builds up a gang, which helps and accompanies him, and they are happy to rob poor widows and rich men alike. They move away from Kutaisi to Tbilisi, then to Odessa and onto St Petersburg, where our hero becomes friendly with Rasputin and, thus, with the Tsar. This, naturally, gives him access to a whole range of sophisticated scams. The gang moves on to the rest of Europe – Warsaw, Vienna, Paris and London – before returning to Russia to mastermind the murder of Rasputin and both the February and October Russian revolutions. He is imprisoned numerous times but manages to escape, he is almost killed on many occasions but escapes. He falls in love with far too many women (his major weakness) and makes and loses fortunes with monotonous regularity but we cannot help liking him. It is a wonderful book and long overdue in English.