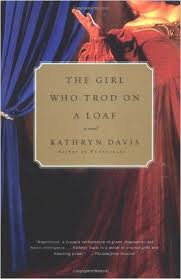 The latest addition to my website is Kathryn Davis‘ The Girl Who Trod on a Loaf. This is a first-class novel about the nature of art (in this case music) and how it intertwines with life. The story is told by Frances Thorn, a woman who, accordingly to her family, disgraced herself and is now a single mother of twin girls, bringing them up in Canaan, in upstate New York, working as waitress. She meets Helle Ten Brix, a Danish composer, who is living in Canaan with her niece and the niece’s husband. The two become close, not least because Helle is a lesbian and attracted to Frances. When Helle dies (at the beginning of the book), she leaves Frances an unfinished manuscript of an opera, a feminist rewriting of Hans Christian Andersen’s The Girl Who Trod on a Loaf as well as various documents, diaries, etc about Helle’s early life. We soon learn that Helle is an unreliable narrator, inventing stories about herself and her family or, at least, exaggerating them. However, she uses these stories, both factual and otherwise, in her work. Frances gradually pieces together Helle’s life, while struggling with her own life (an adulterous affair). It is a superbly well-told story, which deserves to be better known.