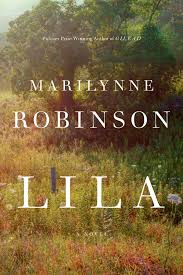 The latest addition to my website is Marilynne Robinson‘s Lila, the third book in Robinson’s Gilead trilogy. This one, of course, tells the story of Lila, whom we have met in the previous two novels as the (much younger) wife of the seventy-seven year old Reverend Ames and mother of his seven-year old son, Robby. In the previous books, she came across as a quiet, unassuming woman, whose origins are something of a mystery. We now learn of her antecedents. She was living with a family, when very young, and, because she cried, she was put outside and left there, even after dark. She was rescued by Doll, a woman who, for some reason, sometimes slept at that house. Doll took her under her wing and they spend the next several years travelling around the country with a group led by a man called Doane, doing odd jobs and just about managing to survive. One year, Doll stopped travelling to allow time for Lila to go to school and learn to read and write. Life was not always easy and most of the time they slept out of doors but they just about managed to survive, till the Depression came and then work and food became harder to find. The group split up and Doll and Lila went off together, till Doll was arrested for knifing a man and Lila, by now an adult, became a prostitute. Eventually, she walked away from that and landed up in Gilead, Iowa, where she met and eventually married the Reverend Ames. While we have been following her early life, we have also learned about her time in Gilead, living in a shack and doing odd jobs. We have also learned of her life with the Reverend Ames, about which she has doubts, even after she becomes pregnant and wonders whether she should leave and set back out on the road, perhaps to look for Doll. It is a very fine book about a woman trying to find her place in the world, whether belonging to a community, being a wife and mother and embracing religion is what she wants or what she needs and her internal struggle to find the solution is not easy.