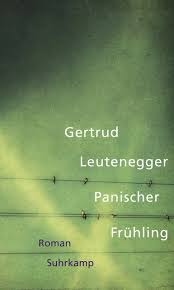 The latest addition to my website is Gertrud Leutenegger‘s Panischer Frühling [Panic Spring]. This book was nominated for both the Swiss Book Prize (link in German) (winner announced 9 November) and the German Book Prize for which the winner has already been announced – Lutz Seiler’s Kruso, which I reviewed last week. It is something of a low-key book, in marked distinction, for example, to Kruso. An unnamed female narrator is staying in London (even she is not sure why) in 2010 (we know the date only because it is the period of the Eyjafjallajökull volcano eruption in Iceland, which means London is much quieter with no planes flying overhead.) She seems to spend her time wandering around London, enjoying unusual historical sites (such as where pirates use to be hanged), the plants and the immigrant culture. One day, she comes across a young man on London Bridge who is selling what is presumably the Big Issue, the magazine sold exclusively by the homeless. She talks to him and then returns most days to continue the discussion, eventually finding out that he is called Jonathan.. She learns of his childhood in Newlyn, Cornwall, son of a fisherman who is lost at sea, while she replies with stories of the house where her aunt and uncle lived in Switzerland, in which she, her parents and her sister used to visit every summer. Sometimes the stories have similarities, sometimes they do not. Though their relationship remains formal (they continue to use the formal German Sie [=you] and there is no physical contact), the relationship becomes something of a platonic love story. Not a great deal happens, though the sister of Jonathan’s Jamaican friend has her wig shop mysteriously burned down, and he tells the story of Gillian, an evacuee from London during the war, whom his grandmother had befriended, though she never learns what happened to Gillian. This is a superbly well-written story, full of poetical depictions of London, the summer house in Switzerland and life in Cornwall, framed by an unusual love story and it is easy to see why it made the shortlist of two literary prizes. It has not, of course, been translated into English (nor have any of her other works) and, sadly, probably will not be.