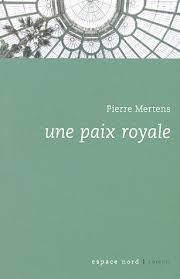 The latest addition to my website is Pierre Mertens‘ Une paix royale [A Royal Peace]. This is a superb book about a Belgian called Pierre Raymond who is now a fairly reluctant travel guide, though this is something he has done for most of his life. However, he now needs a new focus and that focus will be his own country. In the column that he writes for his agency’s travel magazine, he intends to write about his own country and will focus on two specific aspects – the Belgian royal family and Belgian professional cyclists. His interest in the royal family stems from when he was thirteen and he was knocked off his bicycle by a car, whose passengers were King Baudouin and his father Leopold III (who had abdicated in his son’s favour). Raymond gives us considerable detail about the royal family, particularly Leopold III, who was controversial for having stayed in Belgium after the German invasion in World War II and considered by many Belgians to have compromised himself. This book was controversial as his portrait of the royal family is not always flattering. However, we also learn much about Pierre’s life and his family, a family which does divorce much better than it does marriage, as well as learning about the sometimes troubled Belgian cycling fraternity. Pierre gets to meet one of the most famous Belgian cyclists, as well as Leopold III’s widow and second wife as well as King Baudouin. Overall, this novel works very well even if the considerable detail about the royal family could put off some non-Belgians (though not me). Sadly, it has not been translated into English and is unlikely to be translated.