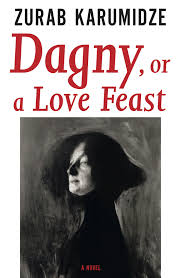 The latest addition to my website is Zurab Karumidze‘s დაგნი ანუ სიყვარულის დღესასწაული (Dagny or a Love Feast). Dagny is Dagny Juel, a Norwegian writer, model for Munch and lover of Strindberg, who, in 1901, travelled to Tbilisi, Georgia, where, after three weeks, she was murdered by her Polish lover, Władysław Emeryk. The novel is allegedly about the last three weeks of her life but it is about much more as, in Tbilisi at the time, were the young revolutionary who would become Stalin and the spiritual teacher George Gurdjeff. Karumidze, without any evidence, surmises that Dagny met both of them and we follow their activities in Tbilisi during that period, though with a lot of mocking. While Karumidze discusses the people he calls shamans (which includes Gurdjeff) and false shamans (which includes Stalin), he also treats us to a wonderful romp through Tbilisi at the time with food, drink and sex naturally featuring but also Japhetic linguistics, revolutionary terror, higher consciousness, the post-modern novel, The Great Game, art, music and astronomy, with even an appearance from an extraterrestrial watching down over a young Albert Schweitzer. It is all glorious fun, albeit with something of a serious intent hidden in there somewhere, and shows that the novel in Georgia is as alive as it is elsewhere.