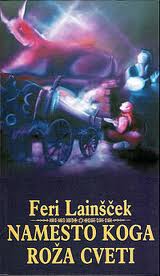 The latest addition to my website is Feri Lainšček‘s Namesto koga roža cveti (Instead Of Whom Does The Flower Bloom). Lainšček grew up in north-eastern Slovenia (then Yugoslavia) near Roma villages and got to know the Roma people. These book is about a Roma family and their neighbours. Halgato (it is a type of gypsy violin playing) is the son of Mariška (real name: Sanji) who, at the beginning of the book, has knifed a secret service agent. He will shortly be arrested. Before his arrest he passes on his nickname, his talent and his violin to his son. Sanji/Halgato’s mother, Tereza, is soon joined by Bumbaš, an itinerant tinker and his three children. He takes the children, including Halgato, with him on his rounds but is not very successful, spending what little cash he earns on drink and women. He soon realises that this is not going to work and his son, Pišti, goes off to school (the only gypsy in the book who learns to read) while he takes Halgato to Bazika Joska, an experienced violinist. Bazika Joska recognises Halgato’s talent and Bumbaš and Halgato set off touring, living on what Halgato’s playing earns them. When they return home, Bumbaš finds that both of his daughters have been made pregnant by the same man. When this man’s body is fished out of the river, Bumbaš is arrested. Meanwhile, Pišti has started an affair with Iza but when he causes a fatal car crash, he is arrested and sent to prison. Halgato, who is also in love with Iza, seizes his chance. Meanwhile, Pišti kills guard while trying to escape and is sentenced to further imprisonment. The books starts when Halgato and Pišti meet up, after Pišti has been released, gone to the US and returned. The meeting is naturally bitter. The gypsies in the book all seem to be stereotypes and all seem to be unhappy. Halgato plays the violin a lot (the title of the book comes from a song he plays) but it does not seem to make him happy. Indeed, he continually is looking for a way out but cannot see one. However, the book is interesting in giving a portrait of a culture which, for most of us, will be unknown and Lainšček tells his story well.