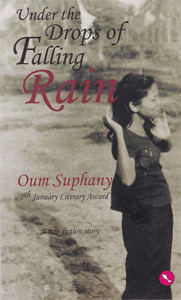 The latest addition to my website is Oum Suphany‘s រោមតំណក់ទឹកភ្លៀង (Under the Drops of Falling Rain). This is a semi-autobiographical novel about a woman who lives through the Pol Pot regime and all the suffering that resulted. She is separated from her family when the Khmer Rouge suddenly start driving people out of Phnom Penh and never sees them again. (Suphany lost four of her six sisters and her parents.) During the course of the novel, her sister dies in hospital. She herself suffers from being used as slave labour and she is forced to marry a man five years her junior, whom she had never met before. Fortunately, he is a kind and decent man and they become attached, before he is sent off on patrol and never returns. As the Vietnamese take over and drive out the Khmer Rouge, she and others escape and face bombing, harassment by Khmer Rouge soldiers and difficulties in finding food. The book tells, in alternate chapters, the story of the Pol Pot days and the story of more recent times. The account of the earlier period is definitely grim and made more horrific because of its personal nature, while the account of the later period is less interesting, not least because things seem to be much better. Overall, it is a well-told story of a terrible period.