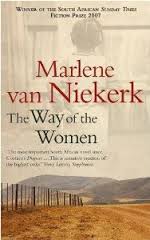 The latest addition to my website is Marlene van Niekerk‘s Agaat (UK: The Way of the Women; US, SA: Agaat). This a superb book about two women. The first – Milla – is a white South African woman, daughter of farmers and herself a farmer, who marries a man, Jak, who is good-looking, sociable and well-liked but who is also abusive, racist and thinks he knows everything about farming, which he does not. The second is Agaat, an African woman who, when Milla was twenty-two, was rescued from an abusive and neglectful family when she was five, by Milla, who takes her in, almost as a daughter. Agaat is intelligent, though hindered by having a stunted arm. However, she is resented by the other Africans, who see her getting what they consider special treatment and she does not mix well with them, even struggling with their language. Things get complicated when Milla has a son, Jakkie, whom Agaat takes care of, leaving both Milla and Jak fighting for his affection and loyalty. Jak wants his son to be the man he was not and he is overjoyed when Jakkie joins the South African Air Force, fighting the Cubans in Angola. Milla wants to run the farm but also have a son who loves her more than he loves Agaat. At the start of the book, Milla has motor neurone disease and can barely move and it is Agaat who looks after her – Jak is long since dead – but who now reverses the earlier roles and it is Agaat who takes command. The strength of the book is the relationship between the two women, who struggle, cope and, on occasions fail, in a world where the men are clearly the weaker sex, both black and white.