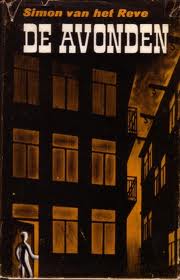 The latest addition to my website is Gerard Reve‘s De avonden [The Evenings]. This book was voted top in a poll by De Amsterdamse Leesgroep (The Amsterdam Reading Group) of the best Dutch literature of the 20th century. It was written while Reve was in prison for having helped a prisoner escape, while he was serving in the Dutch East Indies (later Indonesia). The original manuscript was destroyed by the guards but, fortunately, he had made a copy and he took this with him, when he escaped and fled to Belgium. The story is relatively straightforward. It recounts ten days in the life of Fritz van Egters, starting on 22 December, 1946 and ending shortly after the first hour of New Year’s Day. Fritz is a twenty-three year old Dutch man, who lives with his parents and works in a boring office job. He seems to have no romantic attachments; indeed, he shows virtually no interest in such matters and does very little during the ten days of the novel, except go to a few low-key parties, meet a few friends, get drunk once and talk to his parents. However, he does have something of a dark side, having recounted his childhood love of torturing animals, telling stories which are often macabre or sick and sometimes downright nasty and being quite cruel to various friends, who seem to be used to his remarks. Nothing major happens and the story begin and ends with him in bed, with his life continuing the same as always. I found it an interesting story, as Reve writes well and the dark side of Fritz is interesting, as you wonder where it might lead, but I am not sure that it qualifies as the best Dutch novel of the twentieth century. While it has been translated into various languages, it has not been translated into English. Perhaps, like the guards who destroyed the original manuscript, US and UK publishers found the book nihilist and immoral.