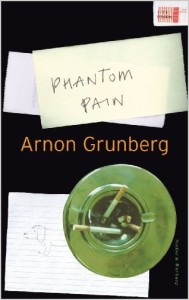 The latest addition to my website is Arnon Grunberg‘s Fantoompijn (Phantom Pain). This is a very funny book about a writer, Robert G Mehlman, who is arrogant, irresponsible, unfaithful to his wife, dishonest, lazy, greedy and utterly self-centred but a moderately successful writer. We follow both his past life as well as getting some detailed accounts of his later life, including his (mis-)use of credit cards, taking a newly met woman to Atlantic City in a limousine when he is utterly broke and then gambling $5000 away, leaving his poor wife stranded in Vienna as he maxes out her credit card, and then having a brilliantly idea for a book, for which he exploits an elderly woman in Brooklyn. Grunberg mocks and mocks again every foible of Mehlman, leaving us to wonder if Mehlman is based on a real writer. Whether real or fictitious, Mehlman is a wonderful creation and the book is a very enjoyable read.