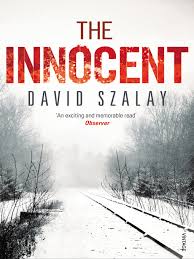 The latest addition to my website is David Szalay‘s The Innocent. Szalay is another of Granta’s Best Young British Novelists. This novel is written from the perspective of a committed MGB (precursor to the KGB) agent, Aleksandr, who Szalay cleverly makes us think of as a reasonable person, despite his firm commitment to the Soviet Union as it was under Stalin (he thinks Khrushchev too soft). He has been given a routine task of checking on Anatoly Yudin, a former concert pianist, who may have been a Nazi sympathiser but is now, in 1948, in a mental hospital, having had part of his brain blown away during the war. We follow Aleksandr both in 1948 and and in 1972, as he looks back at what happened. The director of the hospital proves to be a stumbling block and Aleksandr has to fake a charge against him, resulting in his arrest. Aleksandr feels guilty and volunteers to assist the director’s wife. This will have all sorts of consequences, personal and professional, for Aleksandr which still have repercussions in 1972. Szalay’s idea is interesting, even if he seems to start plot lines and then leave them dangling. But one of the best British young novelists? I am not sure.