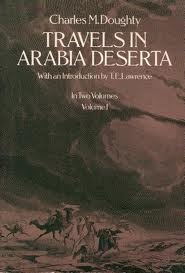 The other day we went to an exhibition of the superb paintings of the very wonderful Anne-Catherine Phillips. We have two of her paintings in our house and would have more if we had bigger walls! As we were leaving, the owner of the house told us that Charles Doughty used to live there. Doughty is an interesting figure in British literature. He is most famous for Travels in Arabia Deserta, a fascinating if somewhat strange account of his travels in that part of the world. It is written in a very literary style that makes reading difficult, though it is rewarding to do so. As this link shows he was arrogant, humourless, self-righteous and mulish. In particular, when travelling in Arabia, instead of disguising himself as a Muslim, as other travellers did or, at least, playing down his origins, he played up his origins and what he saw as his superior religion. Throughout the book, you can read accounts of how he was attacked, vilified, beaten, spat upon and generally reviled by people for whom Islam was everything and everything else nothing. Only his (very basic) knowledge of medicine saved him, as he was able to treat some of the local populace. 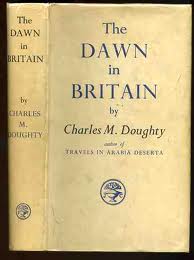 Despite his wanderings and his classic book, his first love was English literature and he intended to become a great writer of English literature. Much of his life was devoted to writing a six volume epic called The Dawn of Britain. It starts

I chant new day-spring in the Muses’ Isles
Of Christ’s eternal Kingdom. Men of the East,
Of hew and raiment strange, and uncouth speech,
Behold, in storm-beat ship, cast nigh our Land!

It doesn’t get any better. It is, essentially, unreadable. If you are a braver person than I, it is still available, thanks to Forgotten Books and you can download the six volumes of Dawn of Britain, the two volumes of Travels in Arabia Deserta and other of his books from the Internet Archive.

The house to the left is where he lived. In fact, it was because I admired the magnificent wisteria that I learned about Doughty, as it was Doughty who planted it. (Incidentally, if you want to own a piece of English literary history, the house is now for sale.) Doughty’s daughters Dorothy and Freda were both designers for the Royal Worcester china company. There are two biographies of him. The more recent one is by Andrew Taylor, called God’s Fugitive but the original one, published in 1928, is by the Arabist, D G Hogarth. (Interestingly, till I just edited it, the Wikipedia entry linked here did not mention the Doughty biography in the Hogarth bibliography.) Both are out of print but both are obtainable used from the usual sources, though the Hogarth one is not cheap.