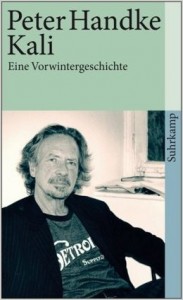 The latest addition to my website is Peter Handke‘s Kali [Potash]. This book, which has not been translated into English (though has been translated into Danish, Dutch, French and Italian), is another of Handke’s almost dream-like stories of an individual travelling to a strange land which may be, in fact, Handke’s view of Austria. In this case, it is a woman singer, who has just finished her season, who heads off to her home region or, at least, as she says, the region next to her childhood region. There she meets a series of people, some of whom work in the salt mines (there are huge deposits, left behind by a long since extinct large sea). These people tend to speak in statements or in philosophical terms, somewhat like people in serious fairy tales or legends, showing a land that seems to be peopled with emigrants and with a permanent pre-wintery feel to it. Is she, as one character says, the personification of death? Is this country Handke’s grim view of his own country? Everything is left somewhat ambiguous but it is still an interesting tale and worth reading, as long as you do not expect to read it in English.