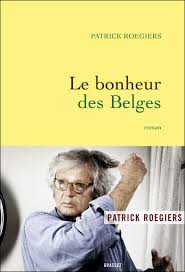 The latest addition to my website is Patrick Roegiers‘ Le Bonheur des Belges [The Happiness of the Belgians]. It is both a response to Hugo Claus‘ Het verdriet van België (The Sorrow of Belgium) as well as to the political and economic crisis Belgium has been facing in recent times. Belgium is the only country where I have visited every town in the country so I have a certain sympathy with and interest in the country and its plight. Roegiers gives us a roller-coaster of a ride through Belgium’s (relatively short) history, its institutions, its culture and its problems, telling his tale with great humour, happy both to mock as well as celebrate and peopling his novel with a whole host of living and dead Belgians, most of whom you have probably never have heard of. It is narrated by an eleven-year old boy who has no name and no parents, who wanders through Belgium, both geographically and chronologically (he is at the Battle of Waterloo and in World War I, for example) meeting people from Victor Hugo to Jacques Brel to Pieter Brueghel and hearing their tale and views while, in the background, Roegiers throws in his comments, witticisms and views. He is not afraid to confront problems, e.g. the Walloon-Fleming issue, and not afraid to gently mock such issues, all the while celebrating Belgium and Belgianness. It is wonderful book, full of joie de vivre. Sadly, given that language (the use of Belgian French and French vs Flemish) is of such importance, I wonder whether it will ever be translated into English. However, if you do read French, I can heartily recommend it. Bonne lecture!