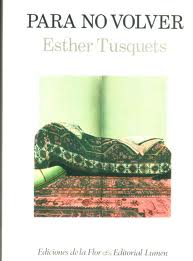 The latest addition to my website is Esther Tusquets‘ Para no volver (Never to Return). This is a first-class novel by one of the leading Spanish women novelists, who sadly died last year. She seems to be relatively unknown in the English-speaking world, despite the fact that several of her books, including this one, have been translated into English. This book is about identity, particularly the identity of a woman when she is seen by the world to be subordinate to a man (her husband), but also about growing old, psychoanalysis, the role of women and Spain and how it has evolved since the Spanish Civil War. It is mainly told in the form of a substantially one way conversation between the protagonist, Elena, and her psychiatrist, for whom she has a host of nicknames, from Papa Freud to Stone Face (he barely speaks and barely reacts to her comments). A feminist work, yes, very much so, but also a work about identity and who we are.