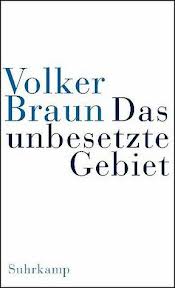 The latest addition to my website is Volker Braun‘s Das unbesetzte Gebiet [The Unoccupied Area]. It tells the story of an area of Saxony called Schwarzenberg during a six week period at the end of World War II. The German army surrendered on 8 May 1945 and Schwarzenberg awaited the imminent arrival of American or Soviet forces. Neither arrived. For six weeks, they were independent and created a sort of socialist republic which Braun clearly saw as a model, albeit an unrealisable model, for the future. The Soviets took over on 26 June 1945, ending the dream. Braun tells the story as an eyewitness account but then, in the second part of the book, adds little odd snippets – from history, from that period but also from the present day which, in some cases, are directly relevant and in others clearly not. It is certainly an interesting novel and not the first novel on the topic from Germany. Sadly , it is not available in English.