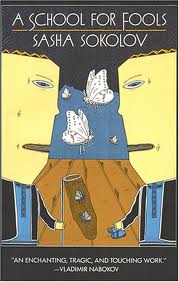 The latest addition to my website is Sasha Sokolov‘s Школа для дураков (A School for Fools). Sokolov did not even try to publish this novel in the Soviet Union in the mid-1970s and it was first published in Russian in the United States. It is easy to see why the Soviet Union would not allow him to publish. It is a very modernist work, more in the style of Joyce and Faulkner than that of any Soviet author. It is narrated by a young man who has psychological troubles and who is looking back two years to the time when he was in a special school. There is no linear plot but, rather, a mosaic of impressions of his life, his trouble with authority (his parents and teachers), his love of nature and his search for identity, which he often discusses with an alter ego. It is a very poetical work, whose reputation has continued in Russia and the West. Though currently out of print in English, Overlook Press will be publishing a new edition in June 2013.