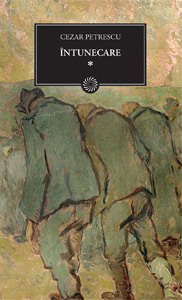 The latest addition to my website is Cezar Petrescu‘s Cezar Petrescu: Întunecare (Gathering Clouds), another early twentieth century Romanian novel. This one was originally three volumes but, sadly, only the first volume has been translated into English so this review only covers that first volume. It is set in the First World War. Romania initially stayed out of the war. King Carol was a Hohenzollern and tended to support Germany and Austro-Hungary. Most Romanians wanted Romania to join Russia, Britain and France, primarily to reclaim Transylvania from Hungary. Romania was ill-prepared for the war when the country finally declared war on Austro-Hungary and, after initial successes, its armies were soon overrun and went into headlong retreat. This novel shows these events from the perspective of a Romanian family – an army colonel and a member of parliament – and their friends and family. Petrescu cleverly shows the widely differing views prevailing both before and after the war and the dark side,with much corruption and profiteering. It is a pity that the other two volumes have not been translated, as they go on to tell more of what befell Romania for the rest of the war and what happened to our hero, Radu Comşa, secretary to the MP.