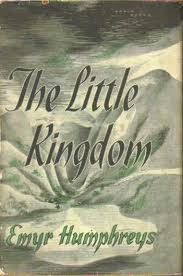 The latest addition to my website is Emyr Humphreys‘ The Little Kingdom. Wales has not fared as well as, for example, Scotland, in recognition of its literature in recent years, despite a thriving Welsh-language publishing industry with some of its output translated into English. Humphreys is still alive at the time of writing, almost ninety-four, but his best-known novels were written before 1970. He was a committed Welsh nationalist and Christian and these traits can be seen in this novel. It is the story of a young man who is a fervent nationalist but moves away from Christianity and gets carried away by his own arrogance and self-importance, as he and his friends and associates fight the construction of a new aerodrome, much of it built on his uncle’s land. For a first novel it is an excellent work though, sadly, long since out of print.