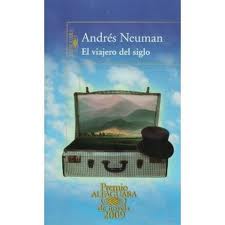 I am continuing my reading of Spanish-language novels. The latest addition to my website is Andrés Neuman‘s El viajero del siglo (Traveller of the Century) though, unlike the previous two, it has been translated into English and well reviewed. Though I did enjoy it, I don’t think it quite lived up to the reputation it has, not least because much of the novel consists of interminable discussions between the main characters on a variety of topics. It is set in the early-mid nineteenth century so discussions of contemporary literature, art, politics, religion, philosophy and other topics occupy these characters. Though they do discuss these topics from a contemporary viewpoint, they also seem to, now and then, to have a twenty-first century sensibility. I also wonder if the sexual fantasies of Latin American male novelists do not sometimes get the better of them. Would a mid-nineteenth century, well-brought-up, upper middle class young German woman really jump into bed with a man the first opportunity she gets? Would she discuss the twisty penises she has seen? Similarly, would a 1990s very religious Argentinian woman, who was opposed to sex before marriage, perform oral sex on a man she had just met, as happened in the Benesdra novel? I have my doubts.