Last week, The Guardian published an article about six British women writers who had a huge influence on British publishing. The print edition had the headline The game changers on the front page of its Review section, with the sub-heading How women dominated publishing this year and, inside, the headline Doing it for themselves (a rather odd headline in my view). Of the six writers mentioned, I have only read one – Hilary Mantel, mentioned in the Guardian article for having won the Man Booker Prize for the second time. Two of the writers – EL James and Amanda Hocking – owe their success to having produced ebooks which appealed to a specific segment of the market, mommy(sic) porn and paranormal romances. J K Rowling has, of course, been around for a long time but this year produced her first adult novel that had mixed critical views but, inevitably, considerable commercial success. Julia Donaldson is famous for her children’s books, particularly the Gruffalo books. Kate Mosse, who I may well read one day, has produced several worthwhile historical novels as well as being very active in the now defunct Orange Prize and its successor. 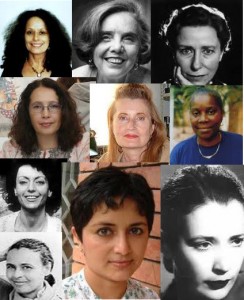 All this is leading up to a discussion as to why women writers are so woefully underrepresented, both on my site and in book review and blog sites generally. Vida, a Women in Literary Arts site, regularly does a count on how books are reserved by and about men and women respectively in several major US and UK reviewing publications. The latest one – for 2011 – shows that in all but two cases men are ahead and, in some cases, light years ahead. Even though Danielle Pafunda tries to explain these figures somewhat, there is no doubt that the figures are not good. Of course, it is just as bad on my site. Only 21% of the books I have reviewed are by women and only 22% of the authors are women. So why is this the case? Are men better writers? Is there a male conspiracy to exclude women writers? In a previous post (scroll down), I mentioned this and hoped to improve but clearly there is long, long way to go. By the way the writers in the photo are, top row, Evelyne Accad, Elena Poniatowska, Monique Saint-Helier; in the second row, Olga Slavnikova, Elfriede Jelinek, Gisèle Hountondji, in the third row, Luisa Valenzuela , Manjushree Thapa, Anna Maria Ortese, and fourth row, Sharon Maas.

So there are some possible reasons. I suspect, as things often are, that reality is more complicated or, at least, may well be a combination of these and other issues.

I am sure that others can come up with many more arguments. Far better commentators than I have basically summed it up as rampant sexism. Francine Prose, discussing the subject, quotes Norman Mailer as saying I have a terrible confession to make—I have nothing to say about any of the talented women who write today. Perhaps looking to Norman as a bastion of feminism might be a mistake but he is probably not alone in that view. Jane Smiley thinks Huckleberry Finn is preferred to Uncle Tom’s Cabin because the former was written by a man and the latter by a woman. Clearly, sexism is the main reason for the undervaluing of women’s writing and it does not look like changing anytime soon, despite James, Hocking, Rowling, Mantel, Donaldson, Mosse and other women writers, like Stephenie Meyer. I will continue on this topic, particularly about my own failings, in a future post