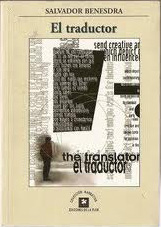 The two latest books to appear on my website are Salvador Benesdra‘s El traductor [The Translator] and Rafael Chirbes‘ La larga marcha [The Long March]. Sadly, neither is available in English. El traductor [The Translator] was only published after Benesdra killed himself in 1996 and then only by a small publisher, with a subsidy from his family. It has been very difficult to obtain a copy and has become something of a cult novel. It has only just been republished in Argentina, though is still difficult to obtain outside Argentina. It has yet to be translated into any other language. It is to be hoped that some worthy publisher will now publish it in English, as it really is an interesting work, though it is more likely to be translated into some other language.

I seem to have been reading a lot of books published in Spanish recently – the book I am currently reading is an Argentinian novel – and I note that Chirbes is the twentieth Spanish author to appear on my website. There are many more to come. As with the Benesdra, this book has not been translated into English but has been translated into several other languages. As far as I can tell, only one of his books has been translated into English and, as you can see from the link, it was not particularly well received. This is the first of his that I have read and I shall be reading a couple more shortly but I suspect that, like all too many Spanish writers, Chirbes is going to remain largely untranslated into English and therefore unknown to the English-speaking world. However, if you do read Spanish, it is the Benesdra that I would particularly recommend – if you can get hold of a copy.